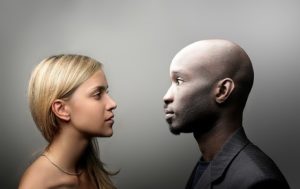 It’s a “love drug.” It’s a “cuddle chemical.” The hormone and neurotransmitter oxytocin has gotten a lot of good press in the recent past, as research has shown that it seems to increase people’s level of affection, trust, and warmth for one another. But new research from the University of Amsterdam shows that oxytocin’s role isn’t always benign: in addition to stimulating positive, bonding emotions, oxytocin also appears to increase bias and prejudice against outsiders. Might this research have implications for political and religious prejudice as well?

Oxytocin is produced in the hypothalamus, a region of the brain that is vital to hormones and the endocrine system. The hypothalamus releases oxytocin in response to social and intimate activities like breastfeeding, sex, and hugging. The release of oxytocin triggers chemical reward pathways in the brain, and the result is a decrease in anxiety and fear combined with an increase in trust and other positive emotions. Because of these cuddly feelings, oxytocin has been heralded as a kind of miracle drug for empathy, a cure for all kinds of negative emotions, and a shortcut to emotional bonding.

But in the recent past, researchers have begun to associate oxytocin not only with warm feelings, but also with heightened prejudice against non-insiders: people not part of an in-group or tribal alliance. To investigate this phenomenon further, Dr. Carsten K.W. De Dreu and colleagues conducted a series of experiments to see whether Dutch males who were administered oxytocin would be more likely to show bias against German and Muslim foreigners.

Similarly, in two experiments that used the Moral Choice Dilemma, participants also showed in-group favoritism when given oxytocin. The Moral Choice Dilemma requires participants to choose between a number of similarly unpleasant choices in a hypothetical scenario. For example, one block of the experiment featured a scenario where five unnamed people would die unless the participant chose to push a sixth person in front of a trolley, killing the sixth person but saving all the others. When participants were given oxytocin, they were much less likely to sacrifice the sixth person if that person had a Dutch name than if he or she had a Muslim or German name. Again, this effect wasn’t present in participants with placebos.

An interesting highlight of this research is that oxytocin seems to create in-group favoritism, but not necessarily out-group prejudice. That is, oxytocin did seem to lead to biases, but those biases appeared to arise from the participants’ greater estimation of their own in-group’s value rather than prejudice specifically against Arabs or Germans. In keeping with its nicknames, the “love drug” works its magic, both good and bad, through enhancing feelings of bonding.

So what does this have to do with ideology? Well, it’s no secret that conservative religious and political ideologies tend to emphasize loyalty to an in-group. And according to some research, people who identify as conservative are statistically likely to be happier than liberals – at least in the United States. While no one has yet researched this particular connection, it’s intriguing to wonder whether part of the reason that conservatives in the U.S. often report being happier is that they might have greater day-to-day levels of oxytocin in their systems. There could be some support for this hypothesis: according to a well-substantiated body of research (see link above), conservatives are likelier to attend church, be married, and have children, all of which centrally feature bonding activities such as positive group interaction and physical touch that stimulate oxytocin production.

Naturally, the connections between happiness, in-group bias, and conservatism are undoubtedly more complex than a simple neurotransmitter. But in a world rife with heady misunderstandings between groups, any new insight – especially insight having to do with such vital elements of life as prejudice and happiness – could well prove valuable.

See here for Carsten et al.’s article, “Oxytocin Promotes Human Ethnocentrism,” in the Proceedings of the National Academy of Sciences.

See here for a New York Times article on the same research.