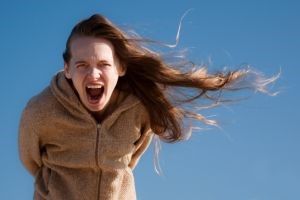 Religion affects every domain of human behavior, from our decisions about politics to our choice of a spouse. In fact, research collected over the past several decades suggests that even the very emotions we feel in our day-to-day lives are affected by our religious orientation, with different religious attitudes correlated with emotions like fear, shame, disgust, and excitement. One psychological research theory, the “polarity theory” of ideology, investigates personal ideological polarity and provides a focused picture of ideological differences in religion and emotions.

Despite what it might sound like, polarity theory isn’t a New-Age treatment for nervous tension and indigestion. Instead, it’s a well-regarded theory of personal ideology first articulated by researcher and philosopher Silvan Tomkins in 1964. Tomkins, best known for his famous “affect theory” of human emotion, insisted that people could be placed along two scales of ideology: humanism and normativism.

The first scale, humanism, measures subjects’ conception of humankind as an active, creative agent in the world. People who score high in humanism in Tomkins’s scale generally have positive views of humanity, expecting people to be generally altruistic, kind, and trustworthy. High-humanism people stress the role that humankind itself has in creating reality, even up to determining the difference between right and wrong – humanists, in other words, believe that people have the power to shape their own destiny. The emotions Tomkins associated with humanism were joy, distress, fear, and shame.

Normativism, a separate scale from humanism, measures subjects’ belief in an external locus of moral and world-shaping control. That is, high-normative people tend to think of moral absolutes as coming from a source outside humanity, and they place emphasis on reality’s existence independent from human beings. Instead of focusing exclusively on developing their own deep, inner potentials and striving toward greater creativity, normativists expect people to strive toward an external and absolute standard of behavior and morality – often one imposed by God. Strong normativists have a dim picture of humanity, expecting people to be selfish and untrustworthy. The emotion cluster associated with normativism is comprised of excitement, surprise, contempt, disgust, and anger.

While it might seem that these two scales are mutually exclusive, in fact research suggests that they are orthogonal, or uncorrelated with each other. That means any research subject might score high or low on humanism and high or low on normativism – on the same survey. One researcher, Ed de St. Aubin (currently of Marquette University in Milwaukee), published an important article in 1996 in the Journal of Personality and Social Psychology that investigated the interrelationship between Tomkins polarity measures and political orientation, value systems, assumptions about human nature, and religiosity. De St. Aubin found that subjects could be placed into four distinct categories, covering all combinations of high and low normativism and humanism. There was no way to predict a subject’s normativism measure using his or her humanism scale, or vice versa.

Interestingly, de St. Aubin found that the higher the score on the normativism scale, the more likely any given subject was to emphasize stories of personal power and dominance in his or her life. At the same time, subjects who scored highly on humanism stressed equality and respect for weakness. Additionally, high normativism scores were correlated with having voted largely Republican in national elections, while high humanism was associated with Democratic leanings.  Finally, high normativism was a predictor of God concepts that stressed God’s superiority, absoluteness, and total control – images of the divine that suggest the world’s state is largely out of human hands. High humanists, on the other hand, were more likely to think of God as being something that existed within human lives, giving people more agency in the world.

Although it may seem that normativism is a nice way of saying “power-hungry dogmatism,” in fact de St. Aubin stressed in another article in 1999 that both dimensions of the Tomkins polarity have their strengths and weaknesses. Exceptionally high humanism may be linked to hedonism, interpersonal naïvety, and lax parenting. Meanwhile, high normativism could lead to bigotry, intolerance, and insensitivity to weakness. Instead, he suggested, is likely a balanced personality, one that includes reasonable levels of both humanism and normativism, that is the most healthy.

The emotion clusters associated with both dimensions of the Tomkins polarity scale suggest that the way we react to the world is strongly shaped by our ideological disposition, and vice versa. But many questions remain. Why should someone who sees God as an external power authority be more likely to experience excitement, disgust, and surprise? And why would people who trust others, value creativity, and see God as a quasi-human creation be more likely to feel distressed or joyful as they go through their days? Further work on ideology, emotion, and religion will continue to address these fascinating questions.